DOUBLEPRO: ONE MORE LAYER CAN MAKE A WORLD OF DIFFERENCE!

There are more than 200 different gutter guards on the North American market alone, and that’s not counting the hundreds of registered patents for rainwater management systems.

Inventors and manufacturers have gone to great lengths to turn out the best possible gutter guards at reasonable prices, but homeowners remain unimpressed. Understandably so, since their gutters keep on clogging—often, it’s the gutter guard itself that clogs up.

Enter Alu-Rex. Based on customer feedback, the company decided it was time to get to the heart of the problem. The result—the all-new DoublePro System—is a marvel of ingenuity.

WHAT FINE FILTERING CAN AND CAN’T DO

How do you keep a rain gutter from clogging? Turns out it’s not that easy.

You might think a fine mesh or screen would do it. It sounds plausible. Indeed, many gutter guards use membranes that resemble bug screens, with holes no bigger than one or two millimetres across. And as it turns out, mesh gutter guards have a solid record of preventing debris as small as pine needles and shingle grit from blocking up rain gutters.

But sooner or later sticky substances build up—things like mud, pollen, roofing tar, and sap—and get stuck in the gaps in the mesh. They harden like glue, and neither wind, nor rain, nor vigorous and tiresome scrubbing can break them down. So at the end of the day, fine-filter leaf guards haven’t solved the clogged gutter guards problem.

DOUBLING DOWN TO BLOCK FINE DEBRIS

Perforated aluminum is another solution with a decades-long track record. Single-layer systems are popular for their durability and because they offer a reasonable compromise between blocking debris and absorbing rainwater. And since their smooth surface makes buildup easier to remove, there’s less scrubbing and scraping to be done up on the tippy end of a ladder.

For Alu-Rex’s experts it was a no-brainer. Forget fine filtration and base DoublePro’s design on the properties of perforated aluminum. 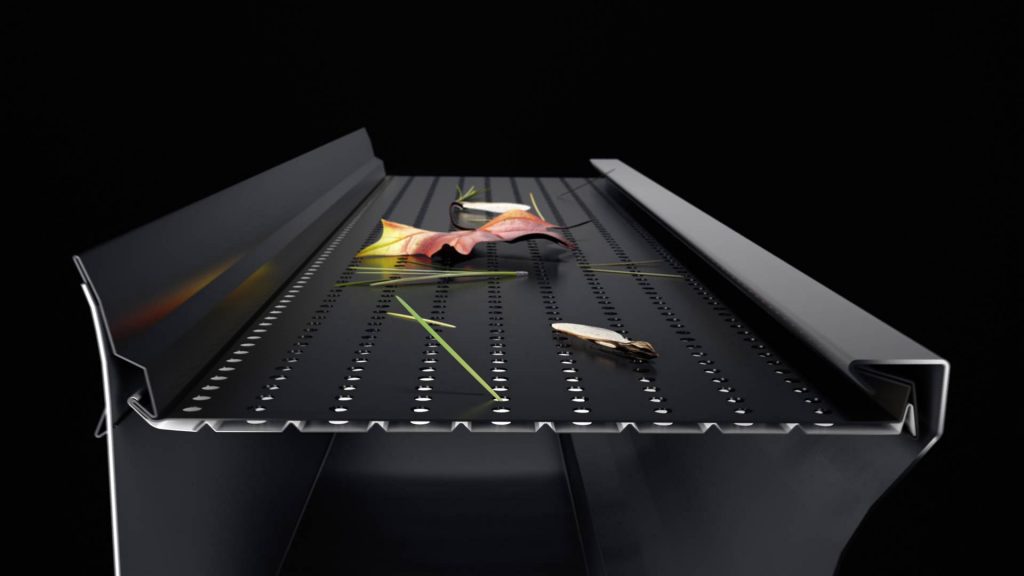 DOUBLING DOWN TO CUT OUT CLOGGED GUTTER GUARDS

The key to it all was the idea of using two protective layers instead of one. The bottom layer’s main purpose is to keep any debris that gets through the top layer from getting inside and blocking the gutter. Its big, oblong openings are offset from the micro-openings above them. So if, say, a pine needle tries to slip through the door, there’s actually no door to slip through.

All filters need occasional cleaning, and DoublePro is no exception. But with DoublePro the lion’s share of the cleaning is done by wind and rain, with human interventions few and far between. Alu-Rex has positioned the two perforated aluminum layers so as to optimize self-cleaning. With DoublePro, the smoothness of the aluminum, small openings in the top layer, larger perforations in the bottom layer, and the space between the two layers all work together to move sap, tar, pollen, and other sticky substances along until they flow right out of the gutter—naturally.

Alu-Rex believes so strongly in its new dual-layer DoublePro gutter guards that it’s already applied for a patent. This groundbreaking new system will soon be available under the name Eclipse™.